How do you teach your daughters to be powerful?

What does that mean anyway? To have power? Power can be a bit of a scary word. Wars have been fought over power. Maybe for me it means that our girls will be able to stand in their power when they are not being treated fairly. To have voices, to be strong women? Yes I want them to be all of that, to be strong and standing tall and equal. How do I do that? I am talking about inner strength and confidence, about the inner drive about that unexstinguishable (ooh that is a nice word) female power.

The girls have just looked over my shoulder. They both ‘Boooed’ the title of this post, they don’t like it they think it is irrelevant. Then one of them just said. ‘Mum you don’t need to teach us to be powerful, we need to teach ourselves be powerful.’ Maybe they are just fine and there is nothing to learn here.

The other day we were on Skype to a friend in the UK and he had to do homework about Italy, so we were helping him. Then one of my daughters said ‘Mum, can you please give us homework?’ I love those moments. Because it comes from them, I am not forcing anything on them they are asking me for work.

So I asked them what do you like to do? What do you want to do? And the girls both said history.

I put my thinking cap on.

So here is how is went, these were the questions.

Who were the suffragettes? Do you think, as women we need to thank them? And if you were a Suffragette how far would you go for your beliefs? Can you dress as a Suffragette and have your portrait taken?

Who was Amelia Earhart? If you were her and you went on a trip what would you take? What happened to her and why did she become very famous?

All of these questions were answered today, my son was also in the room, making home made paper weapons. He was hearing all about these powerful women. Whilst making paper Nun Shucks and a huge paper scythe for the grim reaper.

I asked him ‘what would you do to help the suffragettes?’ He says he would sneak in to the kings bedroom and pour honey on his head, because have you ever tried to get honey out of your hair? It is a nightmare. Or he would put a box of nits on his head. ‘Nits are awful Mum,’ he says. I know.

The girls say they would make the king a birthday cake and then dressed as a suffragette they would jump out and shoot the king. I ask ‘How is that going to help?’ and they say ‘Oh yeah,’ then Amari piped up and said ‘I would threaten to shoot myself unless the laws were changed!’ She also talked about tying the king’s horses legs together.

Then we talked about Amelia Earhart. My other daughter made a suitcase to stick in her book. With flaps with all the goodies she would take. Then she dressed up as Amelia and said ‘Mum, I am going to make a plane and sit in it. Then when the light is right take pictures of me.’ We hit golden hour, we know about golden hour when the light goes crazily beautiful. In Italy golden hour is very golden.

‘Where am I taking these shots?’ I asked. I had one suffragette, Emmiline Pankhurst and Amelia Earhart. Emmiline shouts out, ‘Chain me to the gates!!!’ We did. I said ‘pull a suffragette face’ she did. 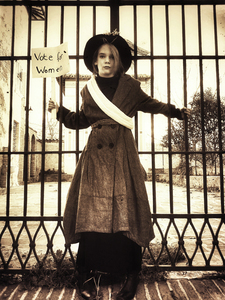 Then Amelia shouts out ‘I need to catch the light, what if I put the box up the tree, like I have crashed?’ We realise time is fading and there is no time to put the box up the tree. ‘Let’s put it on the grass, so get in’, I say and ‘be Amelia Earhart’. ‘Ok’ she says. And proceeds to direct me through a whole series of what she wants as shots. 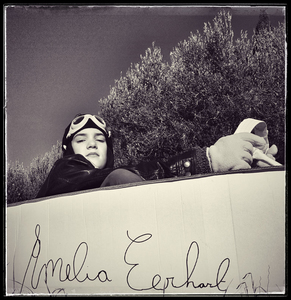 Then as the lights fade, so do I, I realise that I am not feeling like a very powerful golden woman today. I feel as if I have thrown myself on the ‘Unschooling’ cross and all the ideas have been squeezed out of me and I am forgetting who I am. The bigger picture is that as well as teaching them about  powerful woman in history, I have to look after myself and model what powerful is. Which for me is tricky as it is about boundaries and sometimes it simply means a break from it all to find a space where I too can be strong and golden and fly my own plane.