Can kids learn more when the parents are not getting in their way?

When we recently went to the Unschooling/homeschooling event in Italy I was slightly frustrated as I knew that there was going to be a market and we did not have our car. It is a long story. We had a tiny car that the mechanic lent us, so there was no space to put in all the toys that our kids had wanted to sell at the market.

They had nothing to sell.

So on the day of the market this lovely family  asked if our son would like to join their son on his stall.

I suggested that he draw some pictures, which actually was not such a brilliant business idea really. I am being general here but to my eye boys want plastic round things that can turn in to monsters, not drawings. I bought one of my sons pictures, so did his sisters and I helped him out with a start up of 3 euro. He sat there for a while with his friend and managed to sell some things, he sold a few (damaged by the rain) books, a hair clip (to me) two of his pictures (to us) and a few toys. But then with the cash that he had, he ran around the market as fast as he could, charmingly buying goods from generally younger children. Making them very happy. Then what I saw was that he had marked each toy up by 200% and he was selling like crazy. He was good at it. He was making money!

I then walked around the stalls and saw what the other kids were doing, there seemed to be a lot of buying and selling. 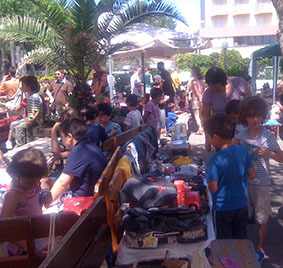 The children were inventive. One child had four pots of jam and two packets of rice cakes and was making jam coated rice cakes for people. She seemed to be selling well. Another sold shells. There was a lot of jewellery. Our girls whizzed around buying from kids who didn’t seem to be selling. There was one boy who’s sister had sold two of her books that she had self published, he had only sold one. There were tears. Then I was asked if Jahli would like to buy the book from the boy, I asked him and he said ‘Er no, maybe, not sure.’ It was five euro and he was not in the giving vein.

Then a group of children collectively bought the book for Jahli with their money. So that Jahli would have the book and the boy would no longer feel sad. It made sense to the kids…

This was a group Unschooled/homeschooled kids and in those few hours, there was marketing, business, negotiations, emotional challenges, sheer unadulterated buying of small possibly (will never use them ever again) plastic things, maths, writing, empathy, invention but more over there was a lot of fun.

We are going to have a kids market at our place soon and it will be our job as parents to step away.

Which to me is always the hardest thing about this journey. At the Unschooling event I wanted to step in, make the signs, help with the maths, put down the table-cloth and basically run the stall.

But if I had done that surely all that natural inventive, self-directed learning that went on would have never taken place…