It is a huge leap of faith you could say. How can kids learn by themselves when it is counter to everything we have ever been told about how kids learn? How did you learn to walk? How did you learn to speak? Aren’t we all built to learn? I have very little memory of anything that I ever learnt in school though, a bit like this parody of the Gotye video on Ted Ed which is a great Ted Ed lesson. In fact practically no memory of it all, mainly because I was incredibly bored and frustrated at school. There were four subjects that grabbed my attention and it was those four subjects which I did well at, no surprise because I was motivated because I loved them. I think there is a wave of change occurring, the realization that kids learn when they are happy and self directed and that the role of the teacher needs to change.

It feels like there is an education revolution taking place. Sugata Mitra is one man who is interested in seeing how children learn and he is running a great project called The School in The Cloud, this project gives the power of learning back to the children. There is a good debate about his project and the future of education on Al Jazeera’s The Stream have a look if you feel like watching a lively debate.  Sugata Mitra’s School in the Cloud project is available for children around the world who don’t even necessarily have schools as an option but they are being given the right to education through the internet. I think that that is amazing.

To me, to remain stuck in a failing system that seems to keep a lot of children and teachers frustrated can only be damaging to society as a whole. I am curious to know how many of you reading this can recall positive school memories? Very very few of the people I talk to do. Some of my friends did, and I am really happy for them, they may have had great teachers. My Dad who is a wonderful painter, still talks warmly about his amazing primary school teacher.

I can’t imagine our kids back in the schooling system, they only ever spent a few years in it. Because like most people they don’t like being told what to do, when to sit, when to stand, when and how to learn something. When they choose a project to follow they jump at it with glee and run with it getting caught up in the flow of learning. I can’t imagine them sitting still at a desk for hours, if they haven’t chosen to sit there. 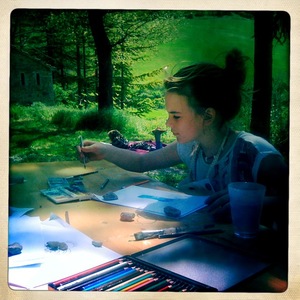 They have learnt to question and don’t necessarily even accept us as right. They voice their opinions, which can be challenging as a parent. My hope is that they go out into the world equipped with a voice, a passion and a clear direction following what they really love. For me learning is about passion and I would choose that every time.