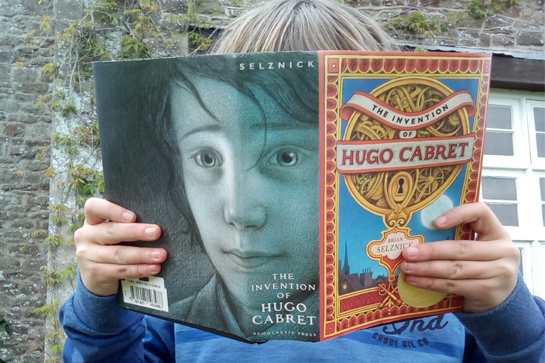 We pack the car to go on a family trip, our girls need to go back to the library to renew books. The library is a new thing we haven’t been in English speaking countries for a while, now we are, the library is exciting. Our son says ‘I don’t have a book for the journey’ we say ‘Use the library’ he chooses three books, he marvels that it is a free service. ‘What, for free? A book? Really? Amazing!’ he has three books but I know that he is a reluctant book reader. That has been a constant. I have never seen him read a book from start to finish.

I see the Simpson’s graphic novel, I wince at the small writing and am relieved to see that he is not wanting me to read it to him, I can’t anyway I am driving. He sits for two hours and reads two books. An inner Mexican wave goes off in me, one of many that go off all the time around learning milestones. One of the books that he has chosen is a challenge, it is a book book, meaning, there are no pictures, there are lots of words. He gets his sister to read it, she reads the first chapter, I look through the rear view mirror as he is following her finger, I think, I am not sure but better keep my eyes on the road. She says ‘I want to read my own book’ then he asks everyone in the car to read to him and no one can as we are either reading or driving. I say ‘you give it a go’ (knowing he can do it) he says I can’t read, I say ‘you may be able to, perhaps you can surprise yourself’. There is silence. Eyes back to the road, then to the rear view mirror, then the road. There is a big pause, ‘I could read it out loud I suppose’. I say ‘yeah ok, do that, I would like to hear it’ He reads, he reads really really fast, like a train that has lost its brakes. I say ‘can you see the full stops?’ he says, ‘Yes’ I say ‘Maybe, stop. Do you know how to make the sentence feel like an end?’ he says ‘yeah’ I say ‘Go for it, oh and maybe just breathe a bit before the next sentence, then my mind can catch up with what you have just said’ he says ‘Yeah’ He reads for ages, out loud. I have that feeling in my chest of extreme happiness, of freedom, of great excitement for what now can be. After a long while he says ‘I think I will read in my head.’ I say ‘great’.

We carry on driving, there is the sound of three children turning pages. I watch the road and realize he is on his way. I am so happy that I have never made him learn to read and that this is his journey, this self led learning he can call his own.

(The picture above is of a book called ‘The Invention of Hugo Cabret‘ by Brian Selznick it is great story telling and is mainly incredible illustrations, great for readers who love visuals.  We love this book as all the characters have really huge intense eyes and now after quite a bit of practice we have now mastered the ‘Hugo Cabret’ stare)