Can children learn to write if you don’t make them?

Our son is nine and he has decided he wants to be able to read and write. He is frustrated that he can’t do either very well yet. So we say ‘How do you want to do that?’ and for a long time he has been saying ‘the computer can teach me.’ It has taught him a lot the computer. It has been fantastic but it cannot gently place a pencil between his fingers. Nor can it whisper encouraging words and tell him he is doing great. Putting a pen between his fingers has not been something our son has wanted to do much, when it has come to writing. But he does want to do it now.

I say ‘How about we do ten minutes a day and we put the timer on?’

‘What do you want to write about?’

‘Shall I suggest some things and if you like one of the suggestions then you can do that?’

I suggest these things

He says ‘Shopping list’ He goes to the fridge and assesses what we needs and shouts things out to me. I write them out. He then looks at my list and copies out the words. Only when his pencil hits the paper am I allowed to start the timer. I start the timer, he pauses, then says ‘Stop the timer, I am not ready’ I stop it. He puts pencil to paper and says ‘Go’ He writes out the list in seven minutes, we have three minutes left. I write buttocks, bum, bottom and butt and he reads them and laughs. The timer goes off, he does dance moves to the alarm sound.

When kids are out of the system it seems that some of them tend to learn much later than schooled kids, as the pressure is not on them, there is no right time to be writing. I haven’t bored him to tears by making him write out words, if he doesn’t want to do it he stops. He is leading the process. He is choosing to learn and I am not making him. It is a good feeling to know that he is wanting to write and I sit here at the table and experience my own inner Mexican wave. Because through the doors of reading lies the unending magic of he written word.

I feel that we are setting out on a journey together. We have been on the platform for a while and now we are on the train which I feel is tentatively leaving the station and it seems like he is the one who is buying the tickets and plotting his destination and I am merely a fellow traveller…

I asked Jahli if he would like to take a photograph about writing and he came up with this picture which he worked up on on the tablet. He asked me to write these words for him. I had to stop myself from saying ‘You write it!’ He didn’t want to write, that is why he asked me to do it. So I did and he took the photograph. 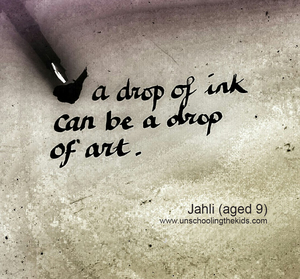 I am happy that he feels this way about ink.