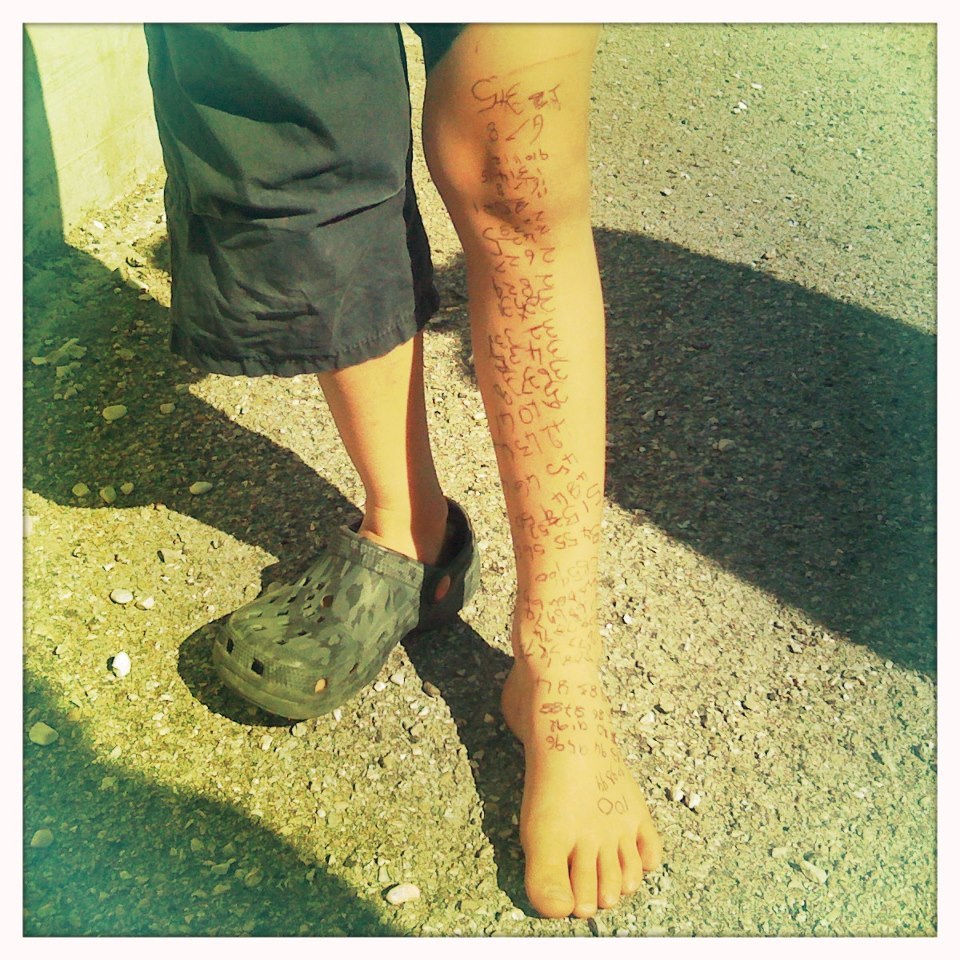 This picture is of my son’s ‘Maths leg’.

I don’t remember the exactly when somebody said I was terrible at maths at school. But there was moment. I most likely suffered from a form of dyscalculia, if I was at school now that maybe what they would say. However, it was either that or just a plain fear and anxiety when it came to numbers, or more over being asked about numbers in front of a whole class. There was a moment when we were doing algebra and we may well have been doing Greek, actually Greek would have been easier for me, I am good with languages.

I was asked to answer a question, I froze and the whole class looked at me. The teacher continued to ask the same question with a burning anger in his face. I remember the huge shame of not being able to answer the question. The whole room seemed tense, then my sweet friend whispered the answer on to her desk and it bounced up in to my ear. After what seemed like an achingly long moment of nothingness, just me going red and the teacher going red for different reasons and I vaguely remember the sound of my heartbeat in my ears. I said the answer and the teacher shouted ‘Well why didn’t you say that in the first place?’ My 13 year old self shouted ‘Because Hayleigh bloody told me!’ I was sent out of the class and spent the rest of the lesson in the hall way, studying the lines on the floor and marvelling at the grey shininess of the school and listening to the way the sounds of footsteps bounced around the corridor, even though often I could not see the feet that went with the footsteps. I enjoyed my experiences in the corridors, I had quite a few, more than I enjoyed the maths lessons, although I did not enjoy the shame that went with those moments.

That same teacher told me, even if I got 100% in my maths exam that result would only mean I achieve a grade 3 GCSE and in the eyes of everybody it seemed that that didn’t count for much.

Then began my inner maths critic, from that moment on I had told myself I was rubbish at maths and I always would be. I have spent a life avoiding anything mathematical. Until we ran a restaurant and I realised that I actually am really good at basic maths, I am really quick and if given the right tools I quite enjoy it. I wish my 13 year old self had known actually how enjoyable maths can be. And that maths is absolutely everywhere, in everything…it is not just a stressful bunch of equations on a blackboard with an angry teacher pointing at them expecting answers.

I once went to visit the famous Summerhill, which is a school where children choose what and how and when they wish to learn. They lead the process, it is a lovely concept and  I think it is  a wonderful place. I remember walking in to one of the rooms, we were shown around by a self-confident, very vocal young girl. I walked in and being a visual person, I was blown away by the sculptures hanging from the ceiling and the art work on the walls. I presumed it was the art room and I said to her ‘What is this room for?’ and she said casually, ‘Oh this is where we do maths.’ Maybe if I had been in that environment I would be a good mathematician. Who knows.