Our Story about Unschooling and how we got here!

As the three of our children walk around Italy most people think that we are tourists as we look typically English. However when our children speak and order ice cream, it is clear that we are not…quite.

We find ourselves at this moment in our lives living on a hill in the centre of Italy, with many cats and we are surrounded by olive trees. We have been very lucky to have rented a beautiful place and for the last three years and this has been our home. 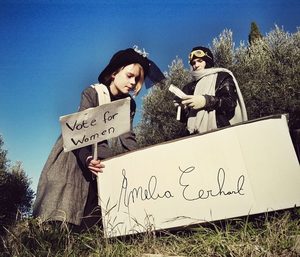 (the girls learning about Amelia Earhart and the suffragettes)

Our children were born in South Africa, we lived there for fifteen years, till the point that we decided that we wanted to be closer to home, which is the UK. We packed up our lives, found homes for our animals, sold everything and arrived in the UK with fourteen bags of luggage and ourselves. We spent two years back in the UK. In South Africa, our children had mainly been home schooled, they also went to a small school which we had set up with other families. The schooling that they experienced in their very young years was more like playing. Until we decided that it could be good for them to go to school and for me to have some time to work and them to have some time to meet other children. They spent around six months in formal schools in South Africa. It didn’t work, for them or for us. We took them out again and schooled them at home. 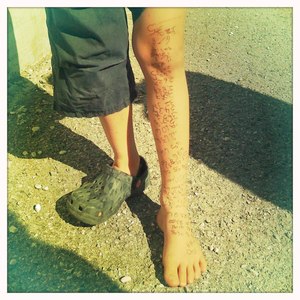 (this picture is our son calls ‘Maths Leg’)

Life was beautiful there, in a heart breaking way and like leaving a relationship, (you know that it is over but don’t really want to leave) we realised we had to let go…we said goodbye to our friends, dogs, cats, house, furniture and throughout that long flight as well as sadness there was a huge sense of freedom. That I hadn’t felt for a very very long time. 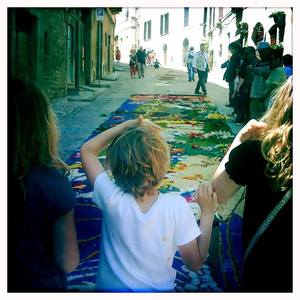 (This is the flower festival in Spello)

We came back to the UK and the kids went to a local school in Devon. We could see quite clearly that in order for them to ‘do well’ at school, they would have to fit into a system that at that point they were not used to. They would have to change, do as they were told, learn when they were meant to learn, play when it was break time, adhere to a curriculum regardless of how they felt about it. It was all counter intuitive to who they were but for a while they did it. Then to us it was clear that it was not working, they became very stressed and fed up. Learning was becoming a drag and not fun.

For them as self directed learners the world is open, they are free to learn how, when and what they want. They make clear strong choices and at a school they had no control over how or what they learned. When one of them asked me one day ‘Mum, why are we doing this?’ I couldn’t come up with a clear answer as when I looked around at how the world is moving so fast technologically and had seen with my own eyes how the kids learnt so brilliantly when on their feet and moving around and choosing what they wanted to learn, I realised that I could not say why they were at school and be truthful and I was not prepared to perpetuate a lie.

So we questioned could there be another way? It was cold and rainy and all that sparkled from South Africa seemed to be a distant memory. 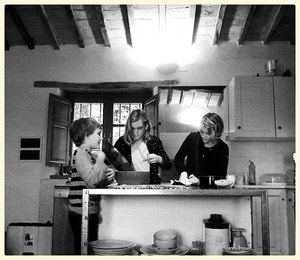 We decided to give away what little we had acquired over that year and to drive to Italy. My husband phoned my Dad who lives there and by fluke (if you believe in fluke) there was a house to rent for a quarter of the price that we had been renting in the UK and the doors seemed to fly open.

We turned up at a small house in the mountains, there were fireflies, porcupines, the air was warm, sheep passed by our house every morning with bells around their necks and a farmer called Severino left tomatoes for us on the outside table. It was like a breather from a life that seemed very stressful in the UK. 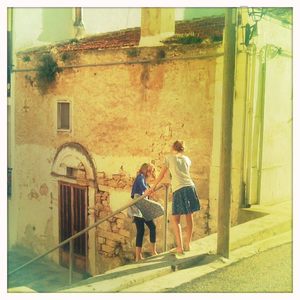 We are still here but now in a different part of Italy, three years later. Our kids have learnt Italian, they speak better than me, they have been blessed with the warmth and kindness of Italian people. They have experienced the craziness of Italy, the many Italian festivals, wonderful circus classes, the confusing bureaucracy, they now know what good food is! All this to me is their classroom and I would not change it for a blue or grey uniform at all and neither, I don’t think, would they.

Even though it has meant that financially for us it has been bumpy and we have lived on a hugely reduced income, I at least know that the precious time (which has been their childhood and that will NEVER come back) we have experienced together. All the ups downs, the colourful bits, they are learning through life. And yes, they can read and they are starting to know their passions which is possibly what I would like to have been discovering when I was their age. More than anything, they are who they are and hopefully living and learning in this way will give them a strong sense of self as they progress through their adult lives.

Lehla is a writer and  illustrator and runs online courses at http://www.lehlaeldridge.com/

This piece was originally written  Kim Stoddart @https://twitter.com/BadlyBehavedOne for http://www.getbadlybehaved.com/?p=226