At the moment I am sitting looking out to sea, I would take a picture but my phone like the fish that lies outside our caravan door is dead.  I sit on an orange chequered caravan cushion, our caravan sits on a trailer which was rented from a man called Jesus, or more correctly Gesu, we are in Spain.

As we were en route to our destination, I looked out of my side mirror and saw smoke billowing from the wheel of the caravan. Our beautiful cheap portable home who is called ‘Alice Roller’ made it all the way to Spain from Italy for our world schooling adventure, only to give up the ghost on a hot highway very near Valencia. Out of seemingly nowhere two angels appeared dressed in orange work suits who beautifully helped us find a local mechanic. In retrospect am wondering if they actually existed…After forty minutes of waiting, Alice was towed to a town called Anna, the names made me smile.

We had to quickly take all that we would need in the short term and we left Alice in Anna with the mechanic. The aim was to drive with our car for seven hours through the night, with our three kids and two cats. We didn’t make it, I am a very bad night driver and we ended up stopping at two garages. At three am we walked the cats around a car park. Young Spanish men in tuxedos billowed out of the garage restaurant, whilst a neon sign bigger than a small cinema screen flashed with words I can’t remember. I felt like I was in a Jim Jarmusch/Wim Wenders movie.

The following morning, we made it to our destination, well to a car park next to the sea, where I am sitting now writing this. Our caravan breakdown happened two weeks ago. We decided to go back to Valencia and get Alice and find a mechanic down here. Hence the fact I am here right now looking out to sea and writing this.

As we drove back from Valencia with the caravan in tow, we had to stop every hour and a half to pour water on the tyres of the trailer. As we were at a gas station I went to get Anthony something from the shop and my bag was stolen from the car. I had my wallet and phone with me and amazing there was no cash in the bag, just mine and the kids passports. We sat at the gas station waiting for the local police but it was lunch time and they didn’t show up. Then I indulged in my own mini meltdown in the car two hours later. Just as I caught my breath and realized it wasn’t such a huge drama the police phoned to say ‘we have found a bag with your passports in it’ which was amazing. As five minutes prior to that call I was questioning my adventurous nature and was in the grip of some bad gremlins that were telling me that everything I was doing was wrong.

How does this tie in with unschooling? It does as for me this is a lesson about life, things don’t always go to plan, in fact sometimes adventures go completely pear shaped. The learning is that sometimes you have to roll with it and know that things will work out. So when it comes to the way we have chosen to live, do I ever know if I am doing the right thing? The answer is no but in following my dreams and trying my best to keep in tune with what the kids are enjoying I feel that there is a lot of good in the way we live. I sometimes long for more security but then I look around and really question if there is such thing as security and then I ask the question does security bring happiness? And what is security anyway? When my friend died a few years ago and I have talked about this before, she said to me, ‘If there is one thing that I would have wished for myself, for my life, it would have been this, too be less scared, I ask myself, what was I afraid of?’ I thought about this when I walked over from the caravan to a local supermarket to buy teabags. As I pondered on the words of my friend a Spanish man walked passed me and on his t.shirt was written the words. ‘FEAR-LESS’ I think that the universe has been flirting with  me…

So in a way I am thankful for the last crazy week. If I can teach our kids and myself to ‘fear-less’ and roll with it when things don’t go to plan, then hopefully in this journey I would have done something right. 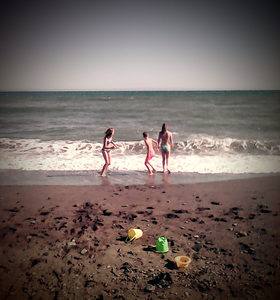